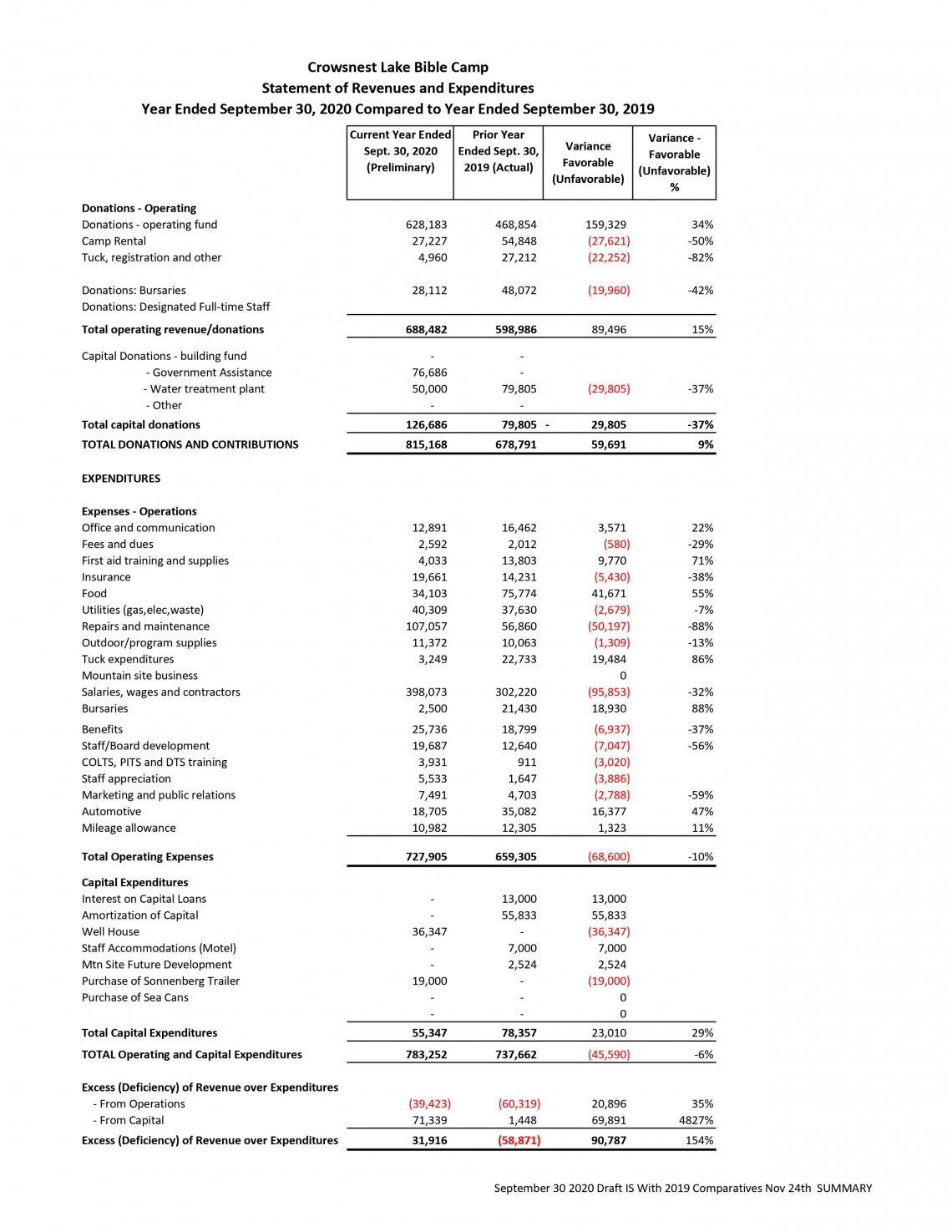 Accountability is very important. At Crow, we make decisions based on what seems best to the Holy Spirit and to us (Acts 15:28), but sometimes we make bad decisions, and need to review them. That's the purpose of having a community. If you have a question about finances, please let us know, and as they come up, we will continue to add to this list! And, as always, we welcome your questions, and your concerns. We even welcome criticism - though in the end, our commitment is to God, and we must please God rather than men. (Acts 5:29)

As we receive these questions, we will add them below.

1. I note that salaries/wages increased significantly from 2019, and had thought that, perhaps due to covid slowdowns, that expenditure might have gone down?

Answer: There were several pertinent factors that led to salary/wage changes in 2020. The first two were known in advance and budgeted for in the lead-up to 2019-2020 fiscal year:

The next two were unexpected increases:

To be entirely forthright... when the impact of Covid became apparent in April, I thought we would be making significant lay-offs. However, the Federal Government created a program (Canadian Emergency Wage Subsidy - CEWS) providing very substantial salary support for businesses and not-for-profits, like Crow, that had suffered a decline in revenue as a result of Covid. I interpreted this program as an effort by the federal government to prioritize keeping people gainfully and usefully employed, rather than seeing layoffs, loading many more people on EI or the CERB. Consequently, I decided to keep people employed & busy, as much as possible, with a lot of 'renovation' type work that needed to be done. In the office, that meant updates to donor management, bookkeeping, and so forth (we automated payroll with Ceridian, for instance). In maintenance, we did approximately a million trips to the dump (maybe only a few dozen, but it felt like a million). We borrowed a woodchipper from Johan Knol and did a lot of bush clean up. We tore down and removed an old storage trailer, as well as the Classroom and the Manager's Cabin at Mountain Site. We renovated the boat house and the archery range. Many other projects that had been long-planned but were never possible to complete, because there were always kids around.

We have applied for CEWS covering March - August 2020, and to date have received approximately $100,000+ from this program. We will apply for September when the fiscal year-end books are finalized, and I would expect a further $20,000 in Salary support (total of $120,000+ over March - September). Given this support, and given the apparent federal government priority of keeping folks employed, it didn't make any sense to me to lay people off to constrain Crow's salary costs.

We did increase two salaries this year, each by $100/month, because those positions were being paid less than minimum wage assuming full-time hours.

Answer: Thank you for engaging the documents.

The short answer on this one is “A Tale of Two Years”.

Our fiscal year runs 1 October to 30 September, so last fiscal year was one quarter of 2019, and three quarters of 2020.

The first quarter, 1 October to 31 December 2019 saw significant - really, unprecedented - contributions to the ministry. Crow’s revenue in those three months was more than $456,000 - an increase of more than 177% year over year, and $246,000 over the same period in 2018. January & February 2020 were also strong months. This was the part of the year that was referenced in the finance report as “the best of times.”

“Your barns will be filled to overflowing, and your vats will brim over with new wine.” ~ Proverbs 3:10

After that… well, 2020 has been “the worst of times.” We lost all our rental revenue in Spring 2020 - tens of thousands of dollars. And we saw significant decline in donations over the summer - which is precisely what you would expect, given the concurrent decline in campers.

These significant declines have continued through September, October, and November as well. All told, this is a real concern for us. Should we budget for donations of $20,000/month? $45,000/month? No, I am really asking: how should we manage our budgeting for this coming year?

Therefore do not be anxious about tomorrow, for tomorrow will be anxious for itself. Sufficient for the day is its own trouble.